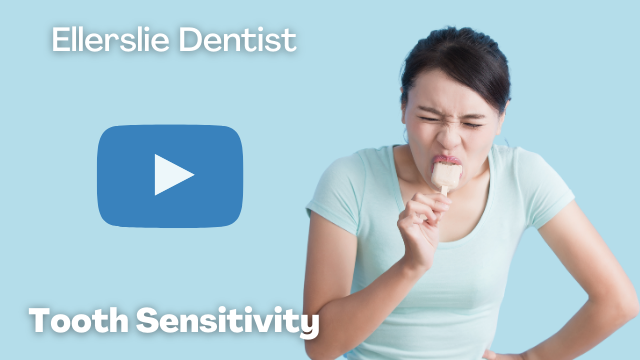 Unfortunately, many people do not bring their concerns. To their dentist, when they do have sensitive teeth. Thinking that it is up common problem. That does not need to be treated.

And they either simply use a desensitizing toothpaste, such as Sensodyne. Or simply avoid some of the foods. That cause them pain, such as hot coffee or ice cream as examples.

However, this is just a mask, and is not helping people. Figure out the cause of their sensitive teeth. That could be a much larger dental problem. And by not seeking help quickly.

These problems can become exacerbated, and be much more difficult to treat or fix in the future. For example, one common reason why people have sensitivity in their teeth.

Is because they have a cavity. Some people think cavities are going to hurt. And others, do not realize that it will cause them to have sensitive teeth. Thinking that a cavity is going to cause more of a dull ache.

Therefore, they do not get checked out. And the cavity is able to grow much larger. Where it can cause bigger problems. Requiring a larger filling to fix. Or even compromising the entire tooth.

Requiring a crown, or an extraction in order to fix. This is why it is never good idea to simply ignore new pains in a person’s mouth. And always get to their Ellerslie dentist as quickly as possible.

When they notice something is wrong. Another reason why people might end up with a sensitive tooth. Is because they might have a bite problem. That is putting too much pressure on one tooth.

And that one tooth is now hypersensitive to temperature. Ignoring the problem. Or using a desensitizing toothpaste. Is not going to fix the bite problem. Which can be fixed very quickly.

By their Ellerslie dentist figuring out which tooth has the bite problem. And then slightly shaving down that one tooth. So that there is no problems with the bite any longer.

However, people who have bite problems. Also tend to have a problem with grinding their teeth. Which is why they had a bite problem cause tooth sensitivity. And when they tell their dentist.

That they are grinding their teeth at night. They can get a dental appliance made. That fits over their teeth while they sleep. So that it eliminates grinding. And can eliminate their sensitive teeth as well.

Not only can grinding the teeth, and bite problems cause sensitive teeth. But it can also cause muscular exhaustion. Tension headaches and even TMJ problems. That now they can avoid because they saw their dentist quickly.

Even though many people want to avoid going to the dentist more often than they need to. When they realize they have sensitive teeth, that should be an indication that they need to see a dentist quickly.

Whether people have newly sensitive teeth says Ellerslie dentist. Or they have been struggling with this for many years. This is definitely something that they should bring up to their dentist.

Many people think that tooth sensitivity is just a way of life. And do not think to mention it. So even if it is a new pain in their mouth. Or they have been dealing with for many years.

They do not think that it is important enough to bring to their dentist’s attention. Unfortunately, tooth sensitivity. Is often a symptom of a much larger dental problem that needs to be fixed.

Is because the tartar buildup on the teeth, irritates the gums. Which causes the gums to pull away from the teeth, and become red and swollen. And the exposed roots of the teeth, are more porous.

And are a lot more able to detect temperature differences in food. Causing pain when people take a sip of something a haunt for example. Like haughty or hot coffee.

Or registers pain, when people eat cold foods like ice cream. And when people have sensitive teeth. Because they have been July this or gum disease. The fix is not a fast one. But it is the only one that will rid of the sensitivity.

One of the first things that their Ellerslie dentist will do. Is get them to start brushing their teeth twice a day every day. As well as flossing their teeth. But getting a dental cleaning is also extremely important.

Because brushing alone, does not eliminate all tartar buildup. Especially below the gum line. Therefore, getting dental cleanings done. Every six months, will ensure that they eliminate that tartar buildup.

That can cause gingivitis. And lead to tooth sensitivity. In the meantime, patients may find some relief. In the form of a desensitizing toothpaste, such as Sensodyne. But this does not actually work for every patient.

While they are waiting for their gum disease to be taking care of. People might have to avoid the foods that they love. Like hot drinks, or cold foods. But this is also why it is extremely important.

That is soon as anyone realizes that they are starting to develop sensitive teeth. That they need to make an appointment with their Ellerslie dentist. It could also be, that people have sensitive teeth.

As well as how to use their sensitizing toothpaste properly. So that they avoid causing greater problems. While they are waiting for their current problems to be fixed.