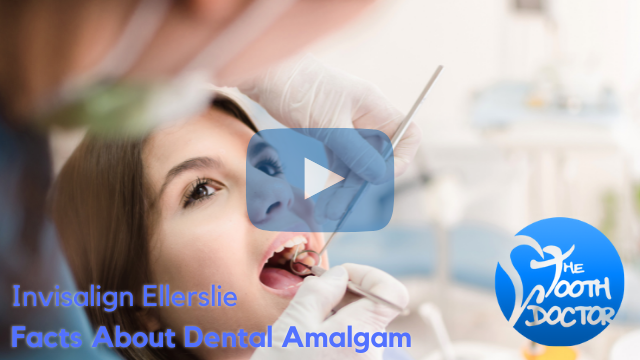 And while there are many reasons why many people opt for Invisalign in Ellerslie. From not wanting others to know. That they are straightening their teeth. To having more control over the process.

There is also, absolutely no problem. Of having metallic braces. When someone has dental amalgam fillings. Some people believe that there is a problem. Because they have had a dental filling.

Made of amalgam, and they have accidentally put down on therefore. Or, have bitten down on tinfoil. And have received a very bothersome electric jolt. Or at least, what feels like an electric jolt.

However, while this is a common scenario. It is not proof that dental fillings are unsafe. It is simply a chemical reaction. The two metals, have what is called a galvanic action happen.

When they come into contact with each other. And while this might not feel like much. When it is in the warm, wet environment of the mouth. And saliva, is slightly salty. What happens when the two metals come together.

Is that a battery is formed. And that is the electric jolt that people feel. The sensation goes into the patient’s tooth root. Where the nerves, send information to the brain. And an electric jolt is felt.

And while people will not experience this. When they have braces on their teeth. People still might opt for having Invisalign in Ellerslie. For other personal reasons.

Some people often want to get there amalgam fillings replaced. And unless there is a reason. Such as the filling is falling out. Or causing problems. The dentist will typically advise against this.

The reason why, is because if they remove a perfectly good filling. It could cause some accidental trauma. To the patient’s tooth. And more often than not. The tooth will begin having problems.

That it did not have otherwise. Therefore, they simply give the advice. That if it is not broken, they should not fix it. And while some people like the look of white filling. Instead of dental amalgam.

They should consider what would happen. If there new dental filling caused problems. They would have to either get a crown. Which is more expensive. Or, they would have to place the entire tooth.

Using dental implants. Therefore, it is simply much better. For people to keep the dental fillings that they have. If they are concerned. And they get a new filling, they should ask for a white filling.

But better than that, people should be brushing their teeth after every meal. Flossing once a day. And avoiding more cavities in the future. Then, they will not have to worry about future fillings.

When people are ready to see a dentist. Whether they need a cleaning. Getting a cavity filled, or if they want Invisalign. They should contact the tooth doctor, at one of their three convenient locations.

One question that many people have for their dentist. Whether they are getting a cleaning, Invisalign in Ellerslie. Or any other reason. That finds them going to the dentist. Is wondering if there amalgam fillings are safe.

Many people are concerned. Especially since a few countries. Like Britain and Denmark. Have banned the use of dental amalgams. And, because people understand. That they contain mercury.

There are several reasons why people should not be worried. First of all, even though dental amalgams do contain mercury. There is such a small amount of mercury. And in the alloy.

Such as with zinc, copper and tin. Mercury takes on completely different characteristics. That make these metals very hard. And very little mercury will leach out of these. In fact, in America and in Canada.

Dentists are still using amalgam for many reasons. First of all, because it is the single most durable substance. To fill cavities with. Even though there is another type of filling that is used.

These white fillings, are now the most common place. Types of fillings, that dentists use. Because they are cosmetically pleasing to the eye. However, they are not as durable as amalgam.

Which means people will have to return to their dentist more often. To get them replaced, then if they got dental amalgams instead. And for similar reasons why people prefer to have Invisalign in Ellerslie.

Many people, would prefer having white fillings whenever possible. But that is another reason. Why many people and up getting amalgam fillings. Is because it is not always possible.

To put white fillings in all situations. In order to put in the white fillings. Dentists will need to ensure that the entire area. Is completely dry. And in a wet environment like the mouth. This can be difficult.

If the dentist is unable to get the mouth completely dry. Then they almost have no choice. Then to put in and amalgam filling. Instead of the white filling. However, for people who have off the head amalgam fillings.

They often worry that they might be worse off. Because they have these amalgam fillings. And want to know. If they should get them replaced. There are many reasons why dentists advise against this.

But mostly, if there are no existing problems. In a patient’s mouth, they should keep things the same. Because replacing something. That is not damaged. May cause future problems.

Therefore, when people come in for Invisalign in Ellerslie. Because they want to straighten their teeth. And have a beautiful smile. And they want to change their amalgam fillings. For that very reason.

They should not be surprised, when their dentist says that they advise against this. However, they will do it. If that is what is most important to the customer. For other dental questions. As well as a checkup. People should visit the tooth doctor, in their three convenient locations.